UMass Dartmouth student Jared Wright of Gloucester, MA took part in a Holiday Concert December 12, 2014, at the the College of Visual and Performing Arts (CVPA) Recital Hall. The University communi...

Jared Wright from Gloucester has been named to the UMass Dartmouth spring 2014 Dean's list in recognition of earning a semester grade point average of 3.2 or higher of a possible 4.0. UMass Dartmo...

Jared Wright of Gloucester who is majoring in Mechanical Engineering at UMass Dartmouth, has been named to the Spring 2012 Dean's List in recognition of earning a semester grade point avera... 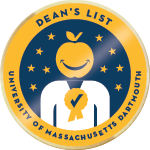 Jared was awarded this badge for 2 achievements. Click on the stories below to view them.