Anthony Rodriguez Named a Quest for the Best Scholar

The "Quest for the Best" awards seek to recognize outstanding student leaders who have typified and promoted the mission of the university. This Vice Presidential Student Service award is given ea...

Of the nearly 9,600 graduates who walked across the stage during San Diego State University's Commencement Ceremonies, only a select group earned recognition as honors graduates including Anthony R...

Out of more than 3,000 students at San Diego State University who were eligible to become new members of The Jane K. Smith Cap and Gown Chapter of Mortar Board, Anthony Rodriguez was one of only 40...

The Seventh Annual Student Research Symposium recognizes the outstanding scholarly accomplishments of students from San Diego State University. More than 375 of the best and brightest researchers ... 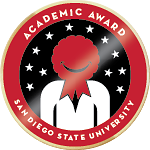 Anthony was awarded this badge for 2 achievements. Click on the stories below to view them.