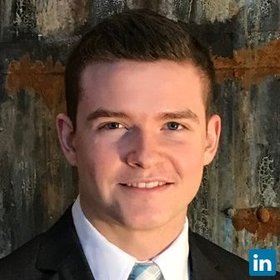 With many experiences, I make the most out of opportunities and make decisions accompanied by biblical guidance. I am a trained leader and a strong follower because I want to learn. My service to the U.S. Army has taught me how to be extremely disciplined and think smarter about my actions. The experience I gained as a server at Frisch's allows me to give outstanding customer service. I am physically, mentally, and spiritually strong and I exemplify values of integrity, loyalty, and honor. Through God's love, I am humble and modest in what I do. I chose to continue my education through business school because I enjoy being in service to you, meeting new people, strategic planning, investing, marketing, logical thinking, taking initiative, administration, collaborating with others, and punctually getting projects done.

Jordan Richards has chosen to study at Miami University, an original Public Ivy located in southwest Ohio. Recently ranked by U.S. News and World Report for its "unusually strong commitment" to te...

I graduated on time with 9 college credit hours.
Fall 2013 - Spring 2017 - Added by Jordan
Jordan Richards was recognized for earning an academic award

Nutrition & Wellness Informative Presentation National Level Contest, 1st Place Family, Career, and Community Leaders of America(FCCLA) I competed in an informative public speaking competition at the sub-district, district, regional, state, and then national level in San Antonio, Texas with my presentation founded on how different nutrients, workout plans, and specific foods effect a person's overall wellness. I placed first at all of these levels.
Fall 2013 - Spring 2014 - Added by Jordan
Jordan Richards was recognized for earning an academic award

Public Speaking State Level Contest, 1st Place The National FFA Organization I competed at the sub-district, district, regional, state, then national level in Louisville, Kentucky with a speech surrounding the aspects of agriculture, how it has influenced our past, present, and future, and the values we can learn from its' traditions. I achieved first place at these levels, except for the national competition.
Fall 2013 - Spring 2014 - Added by Jordan
Show More
Jordan Richards was recognized for earning a spot on an honors list

I achieved at least a 3.5 GPA throughout all of high school.
Added by Jordan
Hugh O' Brian Youth Leadership(HOBY)

Each year, students from my high school competitively apply to be the HOBY Anna High Ambassador. I was selected in 2014 to attend the HOBY program at Rhodes State University and with this, volunteered in many social action causes. I am still an active HOBY alumni in my state.
Spring 2015 - Spring 2017 - Anna High School
Culinary Specialist at Ohio U.S. Army National Guard
As a culinary specialist, I sautée, fry, bake, cook, grill, broil, and create different foods from scratch. I have made plates varying from a burger to lobster tail during my training and while on the job. I also clean as I go and while helping other soldiers with food preparation, maintain a bright, happy atmosphere in the kitchen if it's under my leadership. During culinary training, I was assigned to be the Team Leader because of my grades and leadership capabilities. I communicate directions from our sergeant and make sure food is done correctly and the kitchen is cleaned correctly.
August 2017 - Present
Platoon Guide at U.S. Army

During Army Basic Training and Advanced Individualized Training, while at the rank of Private First Class, I was appointed the Platoon Guide position(leader of 69 soldiers and reported to the Platoon Sergeant). Duties included: guiding soldiers to make right decisions for the betterment of our company, keeping accountability of 69 soldiers, assuring the soldiers were in the right uniform, at the right place, and at the right time, giving commands during activities, helping with soldier's issues and complaints, assigning guard duty, calling cadence, giving march commands to the formation as a whole, working closely with our platoon sergeant to assure all deadlines and standards of behavior are met, and being an example of a leader/soldier that exemplifies the Army Values: loyalty, duty, respect, selfless service, honor, integrity, and personal courage.

As a server at Frisch's Big Boy, I worked in the evenings after school, weekends, and during breaks. Duties included: welcoming families, friends, and visitors into Big Boy, seating them in designated sections, taking their order, bringing their food and drinks, checking up on them, assisting other servers in their duties, creating salads, cleaning, misc. work and closing down the restaurant. The most important skill I gained while working at Frisch's was how to talk to people professionally, market, provide outstanding customer service, keep a positive vibe for my customers, and work as a team.