Christopher Bencic, a Senior studying Speech Pathology and Audiology within the College of Education, Health and Human Services, was named to the Spring 2016 Dean's List. Bencic is among more than ...

Christopher Bencic, a Senior at Kent State University, was named to the Fall 2015 Dean's List. Bencic is among nearly 8300 undergraduate students who have earned and received this recent academic ... 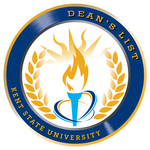 Christopher was awarded this badge for 2 achievements. Click on the stories below to view them.