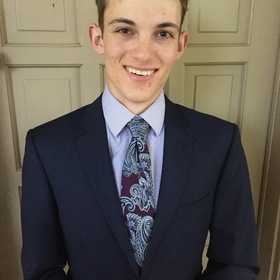 November, 13 2019 - Verified by Mississippi College
Dustin Williamson of Clinton has been named to the President's List for Fall 2018

Dustin Williamson of Clinton, was named to the spring 2018 President's List at Mississippi College. MC releases the president's list after the close of fall and spring semesters each academic year....

Dustin Williamson of Clinton, MS, was named to the fall 2017 President's List at Mississippi College. MC releases the president's list after the close of fall and spring semesters each academic yea...

February, 14 2018 - Verified by Mississippi College
Dustin Williamson was recognized for an accomplishment

Graduated with honors with a 3.9 GPA
Added by Dustin
Civitan Men's Club

Purpose: As members, we strive to serve our peers and work for perfection academically, socially, and spiritually. In every aspect of life, we work to exhibit chivalry toward others as well as hold ourself to a christlike standard. Civitan is a group of men whose bond is the strongest, because of the brotherhood we share; we are able to hold one another to a higher standard. We are a club that encourages each member to grow outward; towards others, inward; toward our goals and upward; towards our heavenly father.
Fall 2015 - Spring 2017 - Mississippi College
Added by Dustin
Tri Beta (Beta Beta Beta)

Dustin was awarded this badge for 4 achievements. Click on the stories below to view them.