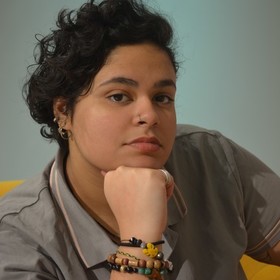 With experiences ranging from being an ARMY JROTC Cadet, to directing five stage productions, publishing a book, organizing marches and protests, and performing poetry around New York City, I can say that I am prepared with the flexibility necessary for a positive contribution to the workforce. I have been blessed to be recognized as Undergraduate of the Year for Omega Phi Beta Sorority, Incorporated, as the junior most dedicated to pursuing writing as a career by DePauw University, a scholar dedicated to creating change through the arts by the Posse Foundation, and one of the top three percent of the DePauw Greek community by the Gamma Upsilon chapter of Order of Omega. These recognition's are humbling, and are just mere stepping stones in the right direction for a career that allows me to combine and concentrate all of the experiences I have accumulated into a force of efficient and well-rounded energy for the future of my career. My specialty is in writing and film, thus my interests are primarily in Arts and Entertainment. I have had experience with stage writing, screen writing, fiction writing, film reviewing, assistant directing, filming, and producing. Most recently, I produced and filmed a segment for an on-line Dominican Magazine called La Galeria Magazine, in which I recorded the stories of Dominican immigrants in New York City. I have also worked with creating social justice and intersectional feminist spaces for young women of color, and am seeking to create content that represents women of marginalized communities.

DePauw University congratulates Greisy Genao, of Corona, NY., on being named to the Spring 2018 Dean's List. The Dean's List recognizes students who achieve a semester grade point average of 3.5 or...

May, 31 2018 - Verified by DePauw University
Greisy Genao , from Corona, NY., joins the ranks of DePauw graduates!

Greisy Genao , of Corona, NY., along with 472 classmates, became the 179th graduating class of DePauw University. The undergraduates were awarded their degrees during the program which took place i...

May, 24 2018 - Verified by DePauw University
Greisy Genao '18 Will Use Fulbright Award to Conduct Research on Cinema in the Dominican Republic

Greisy Genao becomes the fourth member of the DePauw community to be announced as recipients of Fulbright awards for the 2018-19 academic year. An English (writing) major and film studies minor, G...

DePauw University congratulates Greisy Genao on being named to the Fall 2017 Dean's List. The Dean's List recognizes students who achieve a semester grade point average of 3.5 or higher on a 4.0 sc...