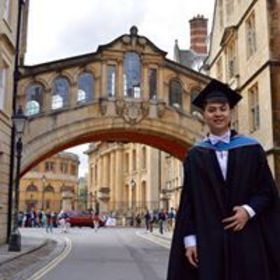 Member of The Honor Society of Phi Kappa Phi
From Taichung City, Taiwan

The Honor Society of Phi Kappa Phi
Mortar Board

Hsin-Ta Tsai of Berea, Ky., recently was awarded a Study Abroad Grant worth $1,000 from The Honor Society of Phi Kappa Phi--the nation's oldest and most selective collegiate honor society for all...

July, 08 2013 - Verified by The Honor Society of Phi Kappa Phi
Hsin-Ta Tsai was recognized for earning an academic award

Doris and Harold Rosenbaum Graduate Scholarship, Berea College, 05/2014 • The Rosenbaum Scholarship was established in 1994 to assist students who have been accepted by or are eligible candidates for enrollment in the nation’s leading graduate and professional programs.
Added by Hsin-Ta
Hsin-Ta Tsai was recognized for earning a scholarship

Beldon Graduate School Fellowship, Berea College, 05/2014 • Awarded annually to Berea College outstanding graduating seniors who have met the requirements for teacher certification or recent (last five years) outstanding graduates, who have taught at the pre-college level with skill and devotion, and plan to enroll in graduate school for further professional development. The students selected must have a superior academic record.
Added by Hsin-Ta
Show More
Hsin-Ta Tsai was recognized for earning a scholarship

Dr. Lee Wickline Scholarship, Berea College, 05/2014 • Given in honor of Dr. Lee E. Wickline, class of ’49. The recipient must be a full-time enrolled junior or senior with a major or minor in education who shows evidence of being well-rounded, demonstrates an enthusiastic interest in school and community activities, and has an awareness of universal human values.
Added by Hsin-Ta
Hsin-Ta Tsai was recognized for earning a scholarship

Full Tuition & Room and Board Scholarship, Berea College, 2011-2014 • Approximately 25-30 international students are admitted to Berea College on a full scholarship each year, and in my case, I was also awarded full room and board funding. As an institutional policy, it is rare that more than one student from any country be offered admission each year (with Taiwan and China being considered one nation in the school policy).
Added by Hsin-Ta
Hsin-Ta Tsai was recognized for earning an academic award

The Honor Society of Phi Kappa Phi
Added by Hsin-Ta
Market Research Summer Intern (Full Time) at P.I.C.K. International Asset Management Co., Ltd.
During the summer following my college graduation in May 2014, I interned in a small think tank in an international asset management company that handles research projects relating to the firm's expansion plans in peer-to-peer (P2P) lending as well as e-commerce. I was put in charge of researching the logistics of an online store selling local, organic foods and environmentally friendly products. I was also assigned to aid a co-intern's P2P project, which aims to launch the first P2P business in Taiwan, with terms-of-use translation editing and other relevant research. As a requirement, I presented each research project to the President, the General Manager, relevant director(s), the research team and its supervisor. About the firm: With capital of ten million USD and 300 employees, P.I.C.K. provides debt collection services for Non-Performing Loans, working alongside major banks and other firms.
May 2014 - May 2014
Teaching Assistant/Associate (Economics and General Studies) at Berea College
Economics: I assisted with assignment-grading, problem-solving, tutoring in the Economics Lab for "International Political Economy," "Research in Economics I," "Principles of Microeconomics," and "Principles of Macroeconomics" courses, and exam-proctoring. General Studies: I assisted with paper-grading and held workshops for writing research papers for "GSTR 210 Writing Seminar II: Identity and Diversity in the United States." About the College: Berea College was founded in 1855 as the first inter-racial and coeducational college in the Southern United States, supporting talented students from low-income families to attend college.
August 2011 - May 2014
Teaching Assistant (International Affairs) & ESL Tutor at Wenzao Ursuline University of Languages
ESL Tutor: I was the only freshman student-instructor who tutored English as a Second Language (ESL). Primarily, I taught spoken English using English-learning magazines selected by the language center. TA: I was the only freshman teaching assistant who taught English newspaper-reading skills and led class discussions using materials designated by the Department. About the University: Wenzao is the only university devoted to languages and one of the 28 Chinese Language Centers accredited by the Ministry of Education in Taiwan.
September 2010 - June 2011
Outcry from Tibet: The Inadequacy of the Universal Declaration of Human Rights
Publications
Proyog India
Prayog Education is an Oxford-based, student-led volunteering program. It is an organization which aims to improve the quality of life of communities in the developing world. We do this by bringing together social enterprises and talented, enthusiastic students from the University of Oxford who are looking for an impactful volunteering experience.
Others