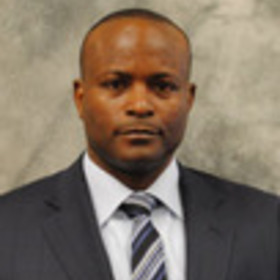 Richard Bogle was born and raised in Kingston, Jamaica. He is a family oriented, hardworking, has a strong sense of integrity, and is always willing to learn new things. He enjoys track and field, the Olympics, table tennis, American football, basketball, and volley ball. He is married and has three daughters. Mr. Bogle joined the United States Army in 1990, four months after moving to the U.S. He attended training at Fort Benning, Georgia, graduating as an Infantryman. He deployed three times to Iraq over his 20 year military career. He served seven months during Operations Desert Storm/Shield as an Anti-armor crewman. Mr. Bogle spent twelve months in Samarra, Iraq during Operation Iraqi Freedom III as a dismounted infantry squad leader, additionally; he spent fifteen months in Ramadi, Iraq during Operation Iraqi Freedom V, the SURGE. During that time Richard served as a Bradley Fighting Vehicle Commander and Operations Sergeant. He has been awarded the Meritorious Service Medal, Army Commendation Medal (7th Award), Joint Service Commendation Medal, and Army Achievement Medal (7th Award). Mr. Bogle has completed an Associate of Science from Vincennes University of Indiana. Richard retired from the U.S. Army in February 2010. Mr. Bogle began work with Engility Corporation as a new equipment trainer for the Afghanistan National Army. Mr. Bogle also held a position with Raytheon Technical Services as a trainer and team leader to ten civilian contractors. Upon leaving Raytheon he accepted a trainer/advisor position with the United Arab Emirates Military until October 2015. After learning about the Veterans Curation Program and what they do to help veterans, he applied and was hired for their program. While at the program he learned about the VA Acquisition Academy and applied and was accepted into the program as a Procurement Technician. He enjoys the comradery of being around and assisting fellow veterans. He is also in pursuit of his Bachelors in Business Administration degree with Mount St. Marys University, with a current GPA of 3.57. He is excited for new opportunities and challenges and hopes to use the new skills learned to master this next career path. Mr. Bogle completed the first year of the W2W program. Mr. Bogle will be moving into the Acquisition Internship Program in 2018, where he will be doing his first OJT rotation at NCO 7; Tucker, GA His career interest is to complete his Masters in Business Administration degree, be proficient at his job, promotion, approval of his peers and superiors, and hopefully be able to retire one day.

Richard Bogle of Columbia, an undergraduate student at the Frederick Campus of Mount St. Mary's University, has been inducted into Alpha Sigma Lambda, the oldest and largest honor society for nontr...

Successfully completed FAR Overview course (CON 90) gaining a basic understanding of the federal acquisition environment, including the structure of the federal government, identifying the basic principles of federal government contracting and using the FAR and VAAR to locate, cite, and interpret specific information.
Gained knowledge of the overall procurement process, from procurement planning to the various components of a procurement package, including the Integrated Product Team.
Demonstrated the ability to meet stringent deadlines in a fast-paced environment.
Participated in developing an appropriate solicitation package that meets all requirements of status and regulations; in response to the governments needs.
Engaged in training on how to perform Simplified Acquisition Procedures.