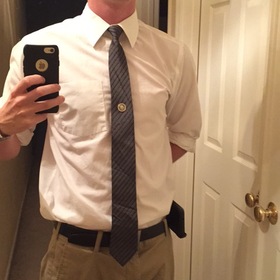 Southeast Missouri State University is pleased and proud to welcome Brandon as one of its newest students for the fall 2015 semester! The University takes pride in its will to do and knows its stu...

Fall 2015 - Southeast Missouri State University
Parking Enforcement Officer at Southeast Missouri State University
Up holding Laws and Regulations set forth by the State of Missouri and by the University.
August 2015 - Present
Server at Cracker Barrel Old Country Store Inc. (CBRL)
Serving people high quality home stile food for a fair price.
August 2015 - Present
Janitorial Staff at Lindbergh School District
Summer Job Cleaning Out schools.
June 2015 - August 2015
Show More
Sales Representative for Mitsubishi at Lou Fusz Automotive Network Inc.
I represented the Mitsubishi North America Corporation selling new and used cars.
March 2015 - May 2015
Sales Representative for Mitsubishi at Russ Darrow Group Inc.
I soled for the Mitsubishi North America Corporation selling both new and used cars.
August 2014 - March 2015
Sales Representative for Nissan at Boucher Automotive Group
I soled for Nissan North America Corporation for both new and used cars
June 2014 - August 2014
Show More
Service Lane / Lot Attendant at Boucher Automotive Group
I was responsible for cars pulling into the service lain checking them in and moving them to the back of the store for the proper Detailing and servicing of the Gusts car. I was also in charge of rotating the lot and moving inventory all over the network and keeping the store looking inviting and dealing cars that needed to be as well as day to day operations of all the store in Southeastern Wisconsin.
December 2012 - June 2014