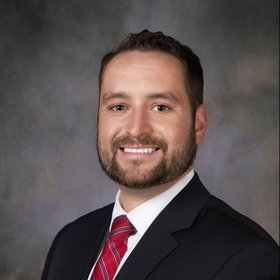 I grew up in Omaha, NE. I attended Millard West High School, graduating in 2006. I attended Metro Community College for my freshman year, transferred to the University of Nebraska Lincoln for my remaining college years, and graduated in May of 2011 with a Bachelor's degree in Business Administration, with an emphasis in Finance. After college, I started my career in banking as a Credit Analyst at Mutual of Omaha Bank, where I was trained to underwrite commercial loans. I worked at Mutual of Omaha Bank from August 2011 to June 2013, when my career took me to a much smaller, local bank called Enterprise Bank. I was the Senior Credit Analyst at Enterprise through December 2015, where I underwrote commercial loans, monitor the commercial loan portfolio, as well as make suggestions on risk ratings and loan approvals. Recently I was promoted to Assistant Vice President of Commercial Banking, where I am responsible for assisting local businesses with their loan, deposit, and cash management needs. My favorite part about working in commercial banking is getting to see what qualities business owners possess and share that make them successful, as well as what makes some of them unsuccessful. My wife Kristyn & I have been married since April 2013, after dating for 7 years prior. Kristyn also works in commercial banking, as a Loan Operations Specialist at First National Bank. We live in west Omaha, and enjoy spending time with our daughter (Graelyn), family & friends, taking our crazy Vizsla dog (Penni) on walks, going golfing, and doing little projects around the house. I have decided to further my education with an Masters in Business Administration, at Chadron State, as I enjoy to continue learning about business, as well as building a stronger foundation for myself in order to expand my career in commercial banking.

Andrew Antonio of Omaha, NE, will earn a degree in Master of Business Admin at the spring commencement on May 7. Ninety candidates are set to receive their master's degrees in the graduate ceremony...