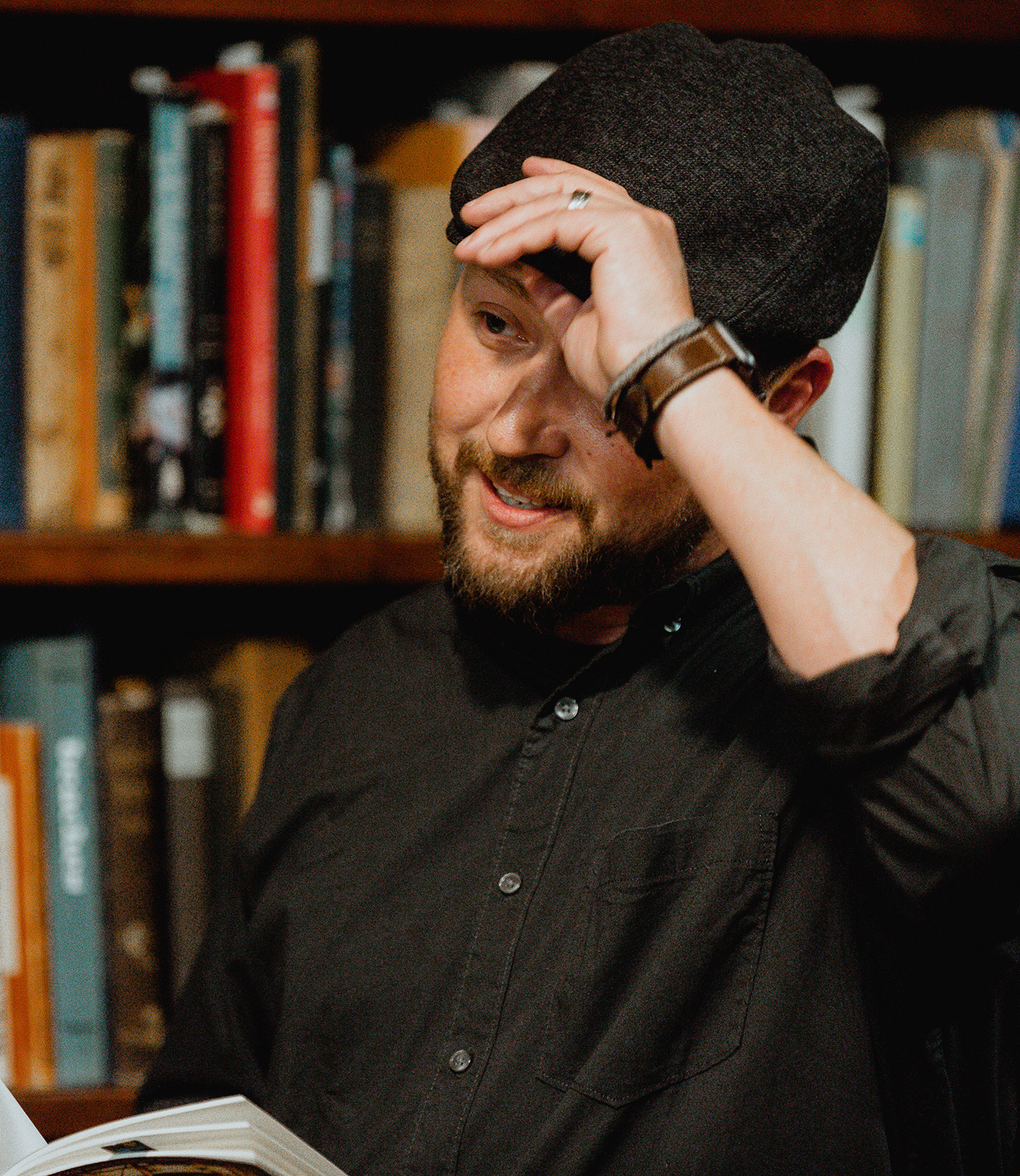 The Center for Oral Narrative is housed in the Arts and Letters building at the University of South Carolina Sumter. The Center serves to document, preserve, and present storytelling, spoken word, oral histories, and dramatic literatures.
USC Sumter Faculty
Added by Ray
Writer in Residence at Columbia Museum of Art
January 2018 - Present
Professor of English at University of South Carolina

August 2008 - Present
Red Dirt Jesus
Red Dirt Jesus is a triptych of harsh landscapes where a man reflects on what he has gained, what he is offering, and what he must lose. It begins with the relationship between father and son that delicately hinges on the tension between hills and ditches, between past and fiction, between throat and gut. Later the speaker is alone, trying on several narrative personas in order to chisel out an understanding of who he is as he moves away from the delicate and airborne. His story is one of dirt, dust, spit, and bone, and he finds solace in grit, knowing that things can only get worse if he lets them. In the end, McManus articulates the understated victory of giving in rather than giving up. As the speaker finds the distant acceptance of stone and rot, he realizes that the body breaks but the spirit doesn’t.
Publications
Driving through the country before you are born
Selected by Kate Daniels as the winner of the South Carolina Poetry Book Prize, Driving through the Country before You Are Born is the first collection of poetry from Ray McManus. The speaker in these poems searches for redemption and solace while navigating from a traumatic loss in the past to a present fraught with violence and self-destruction. The volume chronicles his attempt to glean some measure of forgiveness through acceptance of his own responsibly for his circumstances. The reader is called on to witness family stories without happy endings, landscapes on the verge of collapse, and prophetic visions of horrors yet to come. From these haunting visions, the only viable salvation is rooted in hope that, out of the ruins, there remains the possibility of a fresh beginning.
Publications
Power of the Pen
Nationally acclaimed poet Ray McManus champions the weight of words in students’ lives
Articles
Show More
By The River
Holly Bounds Jackson is by the river with Ray McManus, an American poet with three award-winning poetry collections and associate professor of English at University of South Carolina Sumter. Ray McManus discusses his passion for poetry.
Presentations
Punch.
Ray McManus’s third book of poetry, Punch., is a call for the claw-hammer, a hymn to the steel toe, and a series of lonely missives from truck cabs and office cubicles. Punch. is a book about work, about the will that rises and the dust that falls. It is about being “lost, hungry, and hopeless, creeping toward the pipelines in a '78 Buick Regal with Big Star on the radio.” Sometimes angry, sometimes darkly funny, these lean and muscular poems explore the world of punching in and punching out, the punch-drunk and the sucker-punched. Whether the poems are tightened by the rhythm of a hard hand, or the lines sprawl across the page with swagger, there is real music here. Brute voices, contemplative and haunting, speak to us with unwavering self-conflict and salty confidence. In these poems, life is a struggle and the end is already written, but there's something deeply moving about the resilience and resistance of these voices: “Lunch won't be here / for another hour,” one says, “so when the rain / comes, it is welcome.”
Publications
Found Anew: Poetry and Prose Inspired by the South Caroliniana Library Digital Collections
Found Anew is an anthology of new poetry and prose from writers with strong ties to the Palmetto State that creatively engages with historical photographs found in the digital collections of the University of South Carolina's South Caroliniana Library. In their eclectic approach to ekphrasis--textual response to the visual--editors R. Mac Jones and Ray McManus have recruited an impressive group of poets and fiction writers, including National Book Award-winning poets Terrance Hayes and Nikky Finney (who provides the foreword); their fellow South Carolina Academy of Authors honorees Gilbert Allen, John Lane, Bret Lott, George Singleton, and Marjory Wentworth; Lillian Smith Award-winner Pam Durban, and others. These thirty-one pairings of archival images with original creative responses illustrate the breadth and richness of the diverse talents of South Carolina writers. While the digital collections are a much-valued resource for researchers and educators, Found Anew encourages a wider use as a source of inspiration for writers and artists inventing narratives set in and about South Carolina. In coupling the poems and short stories with the images that inspired them, the anthology shows writers gauging unlikely depths in curious photographs that other eyes might pass over without a second glance, conjuring perfect words for the emotion evoked by a particular image, and rendering and reimagining the visual in seemingly disparate but ultimately linked narratives. An instructive model for active, collaborative engagement between creative writers and culturally significant visual prompts, this collection also serves to demonstrate the accessibility and scope of archival photography available through South Caroliniana's digital collections. Through these creative responses, the images are not recovered or explained--but, rather, found anew. Contributors: Gilbert Allen, Sam Amadon, Laurel Blossom, Darien Cavanaugh, Phebe Davidson, Pam Durban, Julia Eliot, Worthy Evans, Richard Garcia, Will Garland, Linda Lee Harper, Terrance Hayes, Thomas L. Johnson, R. Mac Jones, Julia Koets, John Lane, Brett Lott, Ed Madden, Jonathan Maricle, Terri McCord, Janna McMahan, Ray McManus, Susan Laughter Meyers, Mark Powell, Michele Reese, Mark Sibley-Jones, George Singleton, Charlene Spearen, Daniel Nathan Terry, Jillian Weise, Marjory Wentworth, William Wright
Publications
USC Sumter's Dr. Ray McManus Wins Jasper Literary Award

The University of South Carolina Sumter is pleased to announce English Professor Dr. Ray McManus was recently named the 2019 Artist of the Year in Literary Arts by the Jasper Project. The Jasper Project is a multidisciplinary arts facilitator servin...

The Columbia Museum of Art announces The Write Around Series with Ed Madden and Ray McManus, the latest initiative in its new Writer-in-Residence program. On Sunday, September 16, at 3:00 p.m., award-winning poets Madden and McManus launch the series w...

SUMTER, SC - The University of South Carolina Sumter is expanding summer camp options again this year for students ages 9-14 beginning June 11 through June 29, 2018. Due to the popularity of last year's new options which included a mock trial camp a...

The Columbia Museum of Art has named award-winning poet Ray McManus is inaugural writer-in-residence and will launch the program with a reading and discussion on April 8. McManus will host four writers who have created original work in response to R...